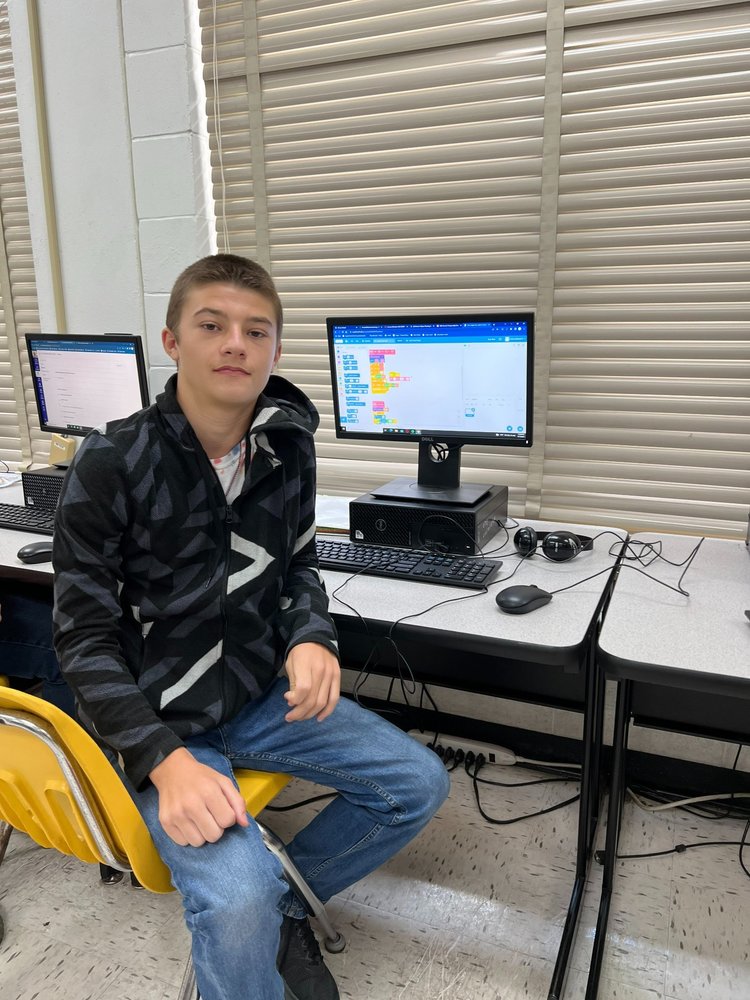 Jesse is an 8th grade student and aspiring computer programmer at Interlachen Junior/ Senior High School in Putnam County, Florida.  Jessie created a game in his computer science class that is NUMBER 1 in the World with over 220,000 views in CoSpaces and played over 125,000 times!

Jessie’s STEM pathway began in Elementary School. Putnam County students are very fortunate to have access to STEM through a resource class in grades K-5 and a core STEM class in 6th grade.  Research shows early exposure to STEM concepts will help children wholly develop. It teaches them soft skills like teamwork and communication while simultaneously nurturing technical skills like computational thinking and coding. Jessie has taken several Computer Science classes in Junior High, most recently, Computer Science Discoveries, or CSD, an introductory course that empowers students to engage with computer science as a medium for creativity, communication, problem solving and fun! Designed by Code.org, the CSD curriculum includes daily lesson plans made up of inquiry-based activities, videos, assessments, and computing tools, allowing teachers to guide and learn along students as they discover core computing concepts.

Jessie has been working diligently on building/coding a game using a website called CoSpaces Edu.  This website allows students at any age to build their own 3D creations, animate them with code and explore the virtual or augmented reality.  Jessie built a recreation of a popular computer/ gaming system game called Five Nights at Freddy’s, where the original game charges participants either a monthly application fee or fee to purchase it for a gaming system. All of the sounds and movements of the game have been coded by Jessie. His goal was to recreate this game on the CoSpaces Edu site where students can play for FREE. His version of Five Nights at Freddy’s is currently the most popular game on the site with over 220,000 views, having been played over 125,000 times!   Mr. Bob Clark, Jessie’s teacher, thinks “this is a pretty big accomplishment for a young man like Jessie and showcases what Putnam County students are achieving in the STEM/Computer Science programs offered.”  Jessie’s incredible accomplishment wouldn’t have been possible without the assistance of dedicated volunteers through the Microsoft Philanthropies TEALS program (Technology Education and Literacy in Schools). TEALS partnerships help teachers learn to teach Computer Science by pairing them with industry volunteers and proven curricula and creates pathways to economic opportunities for the thousands of students being reached daily.  TEALS volunteers are making a difference in classrooms every day,  as visible in Mr. Clark’s Computer Science Discoveries class.

Jessie is also in the process of coding a second game called Portal, which centers around solving puzzles.  With STEM education, young students obtain 21st-century skills, such as systematic thinking, problem-solving, being able to see the relationships between events and creative thinking skills, etc. in connection with STEM education. When asked about his favorite part of building his version of Five Nights at Freddy’s, he said “the feeling you get when something goes right, when a sound or movement happens after a few tries at getting it wrong.”

Kathleen Schofield, Executive Director of the Northeast Florida STEM2 Hub is so excited to see the changes in Putnam County noting “the programs being offered in Putnam County are truly life-changing, and system changing, assuring that all students have access to opportunities to be ready for the technology-intensive future.”  Science, technology, engineering and math are high priority subject groups focusing on robotics, computer science, drone technology, and artificial intelligence programming, all 21st century jobs that will be in high demand across the country where computer skills are a necessity.

Jessie plans on continuing his STEM pathway into High School, where he will be enrolling in a Digital Information class. There, he hopes to expand on what he has been learning up until now and dive deeper into computer programming using the Java and Python programming languages.  For now, Jessie plans to finish 8th grade strong and dream about one day being a Computer Programmer and/or Game Developer.